The sea ice over the Arctic is melting and shrinking so fast we will see in our lifetime something that hasn't happened, it's believed, since the end of the last Ice Age: the opening of an ocean, the Arctic Ocean, and with that access to trade routes and trillions of dollars worth of oil and natural gas, almost as much as the entire U.S. economy.

But, as we reported last fall, this isn't a story about climate change; this is a story about the competition for those riches. The Russians, for instance, have already amassed a major military presence in the region.

It's also about pioneers -- U.S. scientists and naval personnel -- learning to tough it out in the harshness of this still ice-covered frontier. We discovered just how harsh. On a trip to the Arctic.

The Arctic Ocean sits on top of the globe, encircled by Russia, which encompasses about half of its coastline: Norway, Greenland, Canada.

And the United States, thanks to Alaska.  We flew -- as guests of the Navy -- from Prudhoe Bay, Alaska, 200 miles in the direction of the North Pole. Over fractured, thinning ice, to a spot where the ice was still thick enough to support this base camp.

It was a small, temporary village disrupting the peace and purity of the ice, white as far as the eye can see.  The camp was built for a scientific and military exercise, called ICEX 2016.

[Lesley Stahl: Hi everyone. How do you do? Nice to meet you.]

For five weeks, this no man's land of ice was home to an expeditionary team of sailors, scientists and engineers whose mission was to understand how to survive in maybe the most hostile conditions on Earth.

The Navy says those taking part in this exercise are the first humans ever to set foot on this part of the planet.

Lesley Stahl: It's actually beautiful beyond belief isn't it?

Chuck McGuire: It really is.

Chuck McGuire was one of the first to arrive. He's an engineer with the University of Washington's applied physics lab that was brought in to build this camp from scratch.

Lesley Stahl: So you get off the plane. There's nothing. 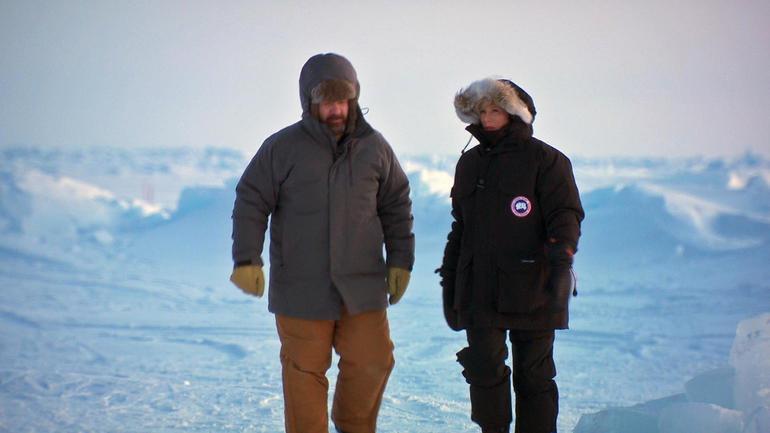 Lesley Stahl: There was just ice?

Lesley Stahl: And you say, "How am I gonna survive?"

Chuck McGuire: You pick up a hammer and start building.

They built a makeshift city called Sargo for roughly 60 people, consisting of a command post, tight living quarters, a mess hall stocked with food airlifted in weekly and some very primitive toilet facilities. 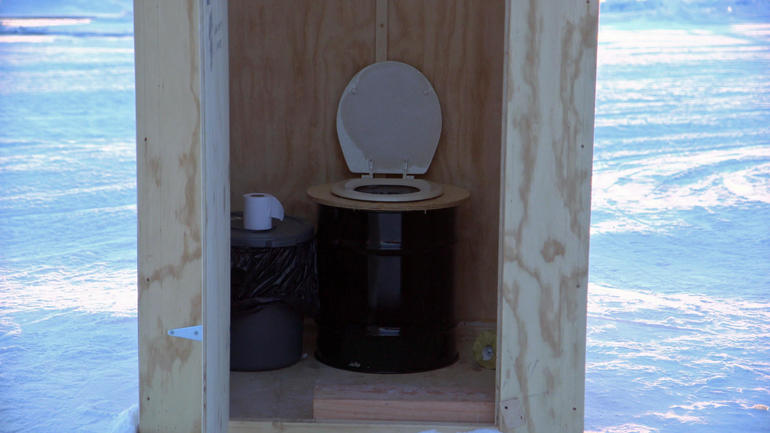 Lesley Stahl: That outhouse is awful. Oh my god!

Lesley Stahl: What about water? You can't just eat the ice, right?

Chuck McGuire: You can if you know what you're looking for.

"All the things that you take for granted in normal civilization, right, shelter, food, the ease of going to the bathroom, right?  That is all different out here."

This ice mining team knows what to look for: "old sea ice" that's been baking in the sun long enough that the salt has leached out.

They bring back chunks to melt down into the camp's only drinking water.

Chuck McGuire: All the things that you take for granted in normal civilization, right, shelter, food, the ease of going to the bathroom, right?  That is all different out here.

Lesley Stahl: What qualities do you think it takes to stay here and survive out here for weeks?

Chuck McGuire: I think maybe you have to be a little off initially. And really understand that everything outside that door is trying to kill you here.

There's a daily briefing in the command post to coordinate the various researchers who are studying and trying to understand this part of the world as they plan for a more sustained presence here. They're analyzing among other things.

How climate change is affecting the way the ice here drifts and migrates.

Lesley Stahl: It feels like you're on land, you get the sense that you're on land – it's very firm you know, a plane could land, but we're moving which is kind of astonishing.

Luers: I think every day it's interesting to wake up and recognize you're 8 or 9 miles from where you were the day before.  It looks the same, but it's pretty interesting to try and figure that out.

The ice moves that much every day in unpredictable directions because of the currents underwater and the wind above.

Also unpredictable is the weather. We met a team of meteorologists using balloons to help with forecasting which is key for any military operation.

Scott Parker: So, these balloons measure your temperature, your dew point, the wind speed.

In other parts of the world, meteorologists rely on satellites for forecasting, but up here near the North Pole satellite coverage is minimal.

Lesley Stahl: How cold does it get up here? 'Cause it's-- right now, I don't know if—

Scott Parker: It is freezing, right?

Scott Parker: The lowest we've had is-- is 26° below Fahrenheit, and today's actually our warmest day—

Lesley Stahl: And with this wind chill factor? 'Cause the wind is really blowing.

Scott Parker: It is. And it's terrible. It's about 25° below zero with the wind chill.

Lesley Stahl: And you're telling me this is the warmest day you've had?

Scott Parker: This is the warmest day we've had so far.

Lesley Stahl: Do you want to go inside?

The temperature can drop to as low as 50 below and that can wreak havoc on just about everything, including these Navy divers who were here to test their latest cold-weather gear, and their endurance in the frigid water.

These robotics engineers are conducting underwater experiments in a temperature-controlled tent. When we were there Doug Horner and his team were field-testing these underwater drones -- for the first time in the Arctic.

Doug Horner: When we first put it in, we check the ballast.

The drones are collecting scientific data about the Arctic where the water gets warmer the deeper you go. They're also getting a picture of what it looks like down below.

Doug Horner: My primary emphasis here is the ability to map the under-ice.  So we have sensors, sonar specifically which is sound, which is focused upwards and what we hope to do with continually putting sound upwards is to make a map.

Lesley Stahl: You're the mapping the bottom of the ice?

Doug Horner: Yes, the underneath portion of the ice.

Lesley Stahl: And why is that important?

Doug Horner: I want to be able to navigate relative to that.  So this is the idea of being able to navigate an underwater robot accurately without GPS.  'Cause in the ice you don't have the opportunity to come up to the surface for a GPS fix.

He says these drones could also be used to patrol the waters of the Arctic – looking for enemy subs, for instance, the way drones hover in the sky over a battlefield.

The Navy is testing this technology, and amassing all of this research, to prepare for an expanded presence in the Arctic, as the ice continues to melt.

The Russians are already there in force. In 2015, they staged a military exercise in the Arctic as seen in this Russian Ministry of Defense footage.

It involved about 40,000 troops, 15 submarines, 41 warships and multiple aircraft.  No one disputes their right to do that on their own territory.  It's just that it wasn't announced.

Philip Breedlove: We pre-announce ours.  No one is surprised by them whereas the exercise that Russia did was a snap exercise which is a bit destabilizing.

Until last year, retired four-star General Philip Breedlove was the supreme Allied commander of NATO with responsibility for the Arctic.

What else is destabilizing, he says, is Russia's military build up along something called the Northern Sea Route skirting the Russian Arctic coastline. The route could become an alternative to the Suez Canal, saving huge amounts of time and money for the commercial shipping industry.

Philip Breedlove: I have heard as much as 28 days decrease in some of the transit from the northern European markets to the Asian markets. That is an incredible economic opportunity. And it could be a very boon— big boon to business around the world.

Lesley Stahl: What would it mean if the Russians did gain control over the Northern Sea route?

Philip Breedlove: If the Russians had the ability to militarily hold that at ransom, that is a big lever over the world economy.

Lesley Stahl: So tell us in a nutshell what's happening.

In 2007, Russia went so far as to plant its flag on the sea floor under the North Pole.

The U.S. has not tried to match the Russian build up, the Navy relying on its fleet of nuclear and attack submarines, the most powerful in the world.

When we were there, the Navy was conducting a submarine warfare exercise, something it does in the Arctic every two years.

When a sub surfaces in the Arctic, they use shovels to carve a visual landmark in the ice that the sub can see. "X" literally marks the spot. But that "x" is a moving target because of the drifting ice.

Which makes maneuvering a windowless steel cylinder the size of a football field to such a pinpoint location seem impossible.

But on this day, the skipper and his crew, punching up through thick ice, nailed it on their first try. It took a few minutes for the sail, the shark fin on top, to completely emerge.

[Luers: There they are.]

When they popped the hatch, a special guest climbed out, the secretary of the Navy, Ray Mabus, who'd been on board for five days, taking part in the naval exercise.

Lesley Stahl: What does it mean that the secretary of the Navy has come up to the Arctic?  Is there a special significance to you being here?

Ray Mabus: Our responsibilities are increasing as the Arctic ice melts, as the climate changes.  And so the Navy has got to be here, we've got to provide that presence and I hope that my presence emphasizes what we do.

As he flew off to Alaska, we climbed down the ladder into the fast-attack, nuclear-powered USS Hampton.

Theron Davis: Oh no. Not at all. You get used to it.

Commander of the Hampton, Theron Davis, took us to the control room as the crew prepared to submerge.

What he and his crew of 20-somethings are practicing is something subs only do in the Arctic: diving down through new ice that had formed around the sub.

Once they get to a cruising level, they practice hide-and-seek with another sub.  In some of the exercises, they also test-fire blank torpedoes.

Theron Davis: So I'm gonna show you a torpedo tube.

One of their challenges is ice keels, huge chunks of ice that jut down from the surface, and confuse sonar-guided torpedoes that can't distinguish them from enemy submarines.

Theron Davis: So what we're working on is saying, "Hey, how can we fix that?"

We returned to the surface.

One American sub in a region with a growing Russian military presence.

During our last day at the camp, something dramatic happened. A crack in the ice along the perimeter became a giant lake.  New fissures formed right through the heart of the camp, up to the doorstep of the command post.

Everything was packed up quickly for an emergency evacuation, a reminder that the most formidable adversary here may not be Russian forces, but the forces of nature.

Since our story was first broadcast, Russia has continued to expand its military presence in the Arctic, unveiling its newest base in the region. The sprawling complex can house 150 troops for up to 18 months. Four more bases like it are planned.