In 1845, two of the best ships England could build set off on a quest to find the fabled Northwest Passage – then vanished without a trace.

The mystery enthralled a generation of adventurers. No one could believe that the pride of the British Royal Navy, commanded by the legendary Sir John Franklin, had fallen victim to nature's wild menace. Convinced that there must be survivors, and tempted by the promise of a reward of 20,000 pounds from Franklin's wife, Jane, the best explorers of the era converged on the Arctic.

But 15 years after Franklin went missing, nearly 20 rescue attempts had turned up only bones and wreckage, and more people had died searching for the missing men than had been lost on Franklin's original voyage.

Charles Francis Hall, a 38-year-old newspaper publisher from Cincinnati, was obsessed. Though he'd never so much as sailed on a boat, he became convinced that he knew how to solve the mystery of the missing ship. He filled four scrapbooks with clippings about the lost expedition and dashed off dozens of letters to Arctic adventurers, who occasionally wrote back.

"Perhaps many people would say . . . 'what have you to do with it?'" Hall later wrote – and many people did say that. But Hall was undeterred: "It seemed to me as if I had been called."

So, in February 1860, Hall talked his way on board a whaling vessel and set sail for the far north – a middle-aged nobody equipped with little more than a reporter's sense of curiosity, a hefty dose of Midwestern pluck and $27 borrowed from his wife.

For such an unlikely adventurer, Hall was shockingly successful: He uncovered a centuries-old archaeological site of European explorers, became a pioneering ethnographer of Arctic people, and made it closer to the North Pole than any non-Inuit explorer before him. He also faced hardship. Historians believe he was poisoned by a member of his own crew on his final expedition.

Today, maps reflect discoveries Hall made (there's even a chilly stretch of water named Cincinnati Press Channel), and artifacts he collected are still used for research at the Smithsonian.

"It's fascinating to me the fact that just some amateur jumps on a boat . . . and he survives and does it well," said Joe Hursey, a reference archivist at the Smithsonian's National Museum of American History, where Hall's journals are stored. "Not just does it well, but makes discoveries. How did he do it?"

Not the way Franklin did it, that's for sure. The British explorer's ships were powered by the latest steam engines and operated by a 130-person crew. He set sail for the Arctic with a 1,000-book library, two organs, 8,000 tins of canned food and a porcelain dining set on which to serve it. When their vessels became trapped in the ice north of Canada, the voyagers cloistered themselves inside their ships, instead of seeking survival advice from the native Inuit.

Many of Franklin's failed rescuers also ignored the local people who might have guided their search.

"The pattern for interaction between white people and the Inuit in those early days was pretty disdainful," said Bill Fitzhugh, director of the Center for Arctic studies at the National Museum of Natural History, which houses the other half of Hall's collection. "The Europeans thought that they came from this grand civilization of big cities and fancy technology and big boats and so forth, and they thought the Inuit were really living on the edge of survival."

Hall saw things differently. In the introduction to his memoir, he quoted the advice of a fellow Arctic explorer: "We experienced many severe trials; but . . . the major part of them emanated from our mode of living. When we lived as the Eskimeaux (an outdated, derogatory term for the Inuit people) we immediately recovered and enjoyed our usual health."

In other words, there was no reason to starve if you availed yourself of the generosity of the locals. (The memoir doesn't mention how Hall's Inuit companions felt about that.) 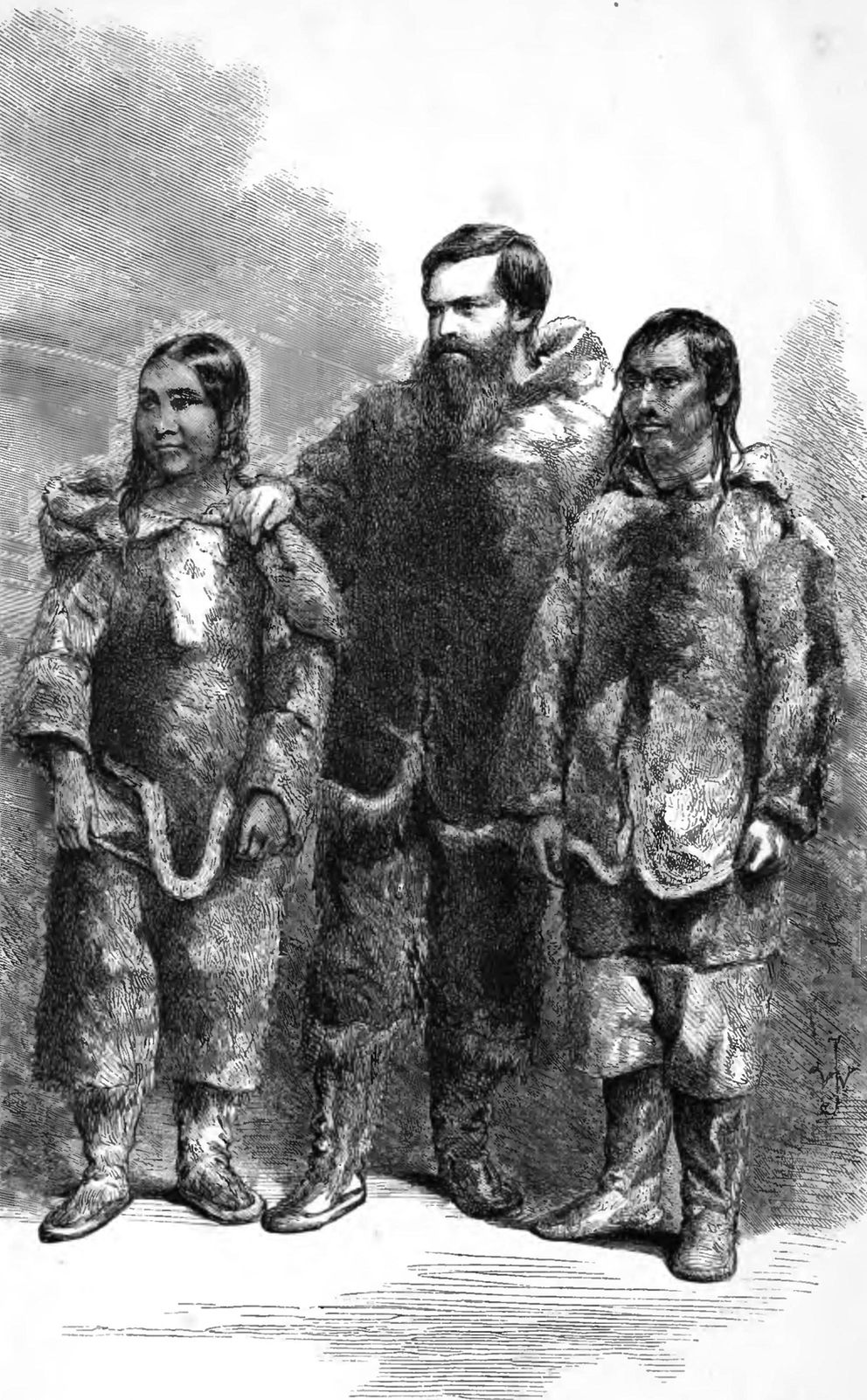 From left, Tookoolito, Charles Francis Hall and Ebierbing in the frontispiece to “Arctic Researches, And Life Amongst the Esquimaux” written by Hall (Wikimedia Commons)

Hall also believed that Inuit stories of their interactions with Europeans would lead him to the Franklin survivors. While following one such tale, he stumbled upon the ruins of an abandoned mining operation. It was clearly European, but it was much too old to have been used by Franklin or any of his contemporaries. Relying heavily on help from two Inuit guides, Tookoolito and Ebierbing, Hall mapped and excavated the area. Ultimately he realized that he had uncovered relics of a failed expedition led by Elizabethan privateer Martin Frobisher 300 years earlier.

"Of course he didn't know what he was doing with archaeology – we hadn't even invented archaeology yet – but he was practicing it, recording where things came from," said Fitzhugh, who in 1993 used Hall's records to write a book about Frobisher's voyages

Similarly, Hall, who had no navigational training, helped redraw maps of the Arctic by pointing out that a strait named for Frobisher was actually a bay and was not a path to the fabled Northwest Passage. "Maps worldwide were changed," Hursey said.

Except for a brief return to America to collect supplies and raise more funds, Hall spent all of the 1860s in the North. He filled thousands of pages with interviews with and detailed observations about his Inuit companions' lives.

Standing in the vast warehouse that holds Museum of Natural History's anthropology collections, Fitzhugh opened three drawers containing artifacts that Hall had collected on his voyages: wooden goggles that protected the eyes from blinding light reflected off brilliant white snow; sinew-backed bows made from bone, which made archery possible in a land without trees; sophisticated harpoons tipped with spurs that spun and hooked into a seal's flesh to prevent the animal from pulling away. The tools are testament to Inuit people's ability to adapt to the Arctic, honed over 4,000 years of living amid the ice.

"It really shows what life was like before Europeans started coming," Fitzhugh said.

For Fitzhugh, who spends his summers doing archaeological research in the same areas of the Arctic that Hall once explored, artifacts like these are "gold bullion." And Hall is a model of field work done right.

"I see myself a little in Hall's shoes," he said. "He gave me a lot of ideas about how to pursue goals and to work with local people and to get to know them, to understand them and to adopt their ways."

But Hall was far from flawless. Hursey pointed out that in thousands of pages of notes, the explorer never mentioned the wife and two young children he'd left behind in Cincinnati. And even as he lived alongside the Inuit, he harbored the arrogance and prejudices of his era; Hall was quick to dismiss his companions as "uncivilized" even as he depended on their expertise for survival.

He also had an ego, which inflated more when he was made commander of a U.S. Naval expedition to the North Pole in 1871.

"Here's the problem with Hall, and why a lot of history has sort of forgotten him," Hursey said. "All these people involved in all these searches and all this stuff were well known, were well educated. . . . And then you've got this guy here, a nobody, and he's going to lead us and tell us what to do, and say 'I am the greatest?'"

Hall's swagger made him enemies on board the ship, particularly among the scientific staff. Soon, he was suffering from strange aches and unexplained fatigue. In late October, after the ship became trapped in ice for the winter, Hall fell violently ill. Convinced that he was being poisoned, he refused all food. But it was too late. Hall died on Nov. 8, 1871.

The ship's doctor, Emil Bessels, attributed the explorer's death to apoplexy, and a Naval investigation concluded that Hall had died of natural causes. But later historians noted a suspicious passage in Hall's journal in which he wrote that his coffee tasted oddly sweet – a signature of arsenic. 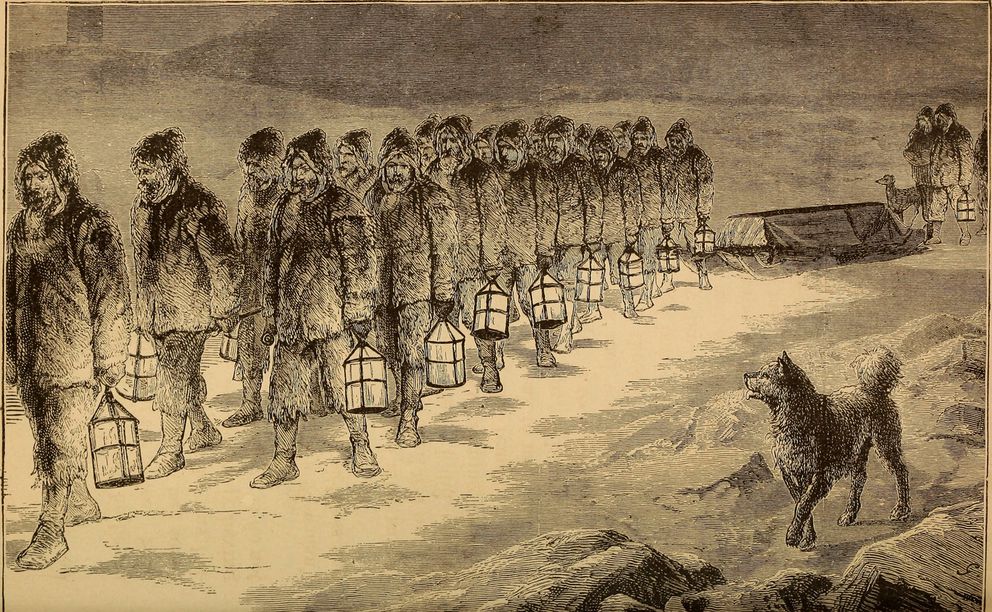 The funeral of Capt. Charles Francis Hall from “The Frozen Zone and Its Explorers; A Comprehensive Record of Voyages, Travels, Discoveries, Adventures and Whale-Fishing in the Arctic Regions for One Thousand Years” (Wikimedia Commons)

A century later, Hall biographer Chauncey Loomis – who had been Fitzhugh's professor at Dartmouth College – ventured to northern Greenland to exhume Hall's body, which had been well-preserved by permafrost. Tissue samples revealed that Hall had indeed ingested alarming amounts of arsenic shortly before his death. The element was a common component of the quack medicines of the 19th century, so it's possible that Hall was trying to medicate himself. Neither Fitzhugh nor Hursey quite buys that argument: "Maybe the doctor dipped into his little chemistry kit," Fitzhugh said.

Hall's last act was an attempt to reach the North Pole by sledge. It was a hard journey, Hall wrote in his journals, made more punishing by the poison already coursing through his veins.

Finally he reached a point at which he could go no further. It was an isolated spot on the northwest tip of Greenland hemmed in by impassable mountains and a channel packed with fast-moving ice. Judging by the stars, which had been visible since the long Arctic night began nearly a month before, Hall was within 600 miles of the North Pole. It was not the top of the world. But it was close enough.

There, Hall sat down to write his last message to the secretary of the Navy, which he sealed inside a copper tube that he then buried in a small rock cairn. Years from now, the thinking went, when future explorers happened upon this site they would see the cairn and know what Hall had done.

The tube was uncovered by Naval investigators a decade later and now sits in the Museum of American History archives, alongside a report from the Navy's board of inquiry. Hursey opened the Navy's yellowed manuscript to one of its last pages and began to read the description of Hall's last venture: "The first step taken by Captain Hall fell upon land more northern than white man's foot had ever before touched."