The Arctic is warming more than any other region on Earth, which creates feedback loops that are notoriously difficult to predict. Thawing permafrost releases trapped carbon and methane into the air, fueling further warming. However, the thaw also releases previously frozen nitrogen and increases the rate at which nitrogen is transformed into forms that are useful for plants. More plant growth may have a cooling effect because plants bind up atmospheric carbon, but plant growth also allows comparatively more solar energy to be absorbed at Earth’s surface than ice does.

Accurate climate predictions depend on our understanding of the complex systems at play in the Arctic. However, current models predicting plant nutrient uptake in the Arctic do not take into account the differing root traits of Arctic species or the plants’ competition with microbes. Zhu et al. tested two prevailing models and a recently developed nutrient competition (N-COM) model against observed nitrogen uptake for three Arctic plant species to determine which model is most true to life.

First, a bit of background: Plants must compete with microbes for the available nitrogen in the soil. Most of these microbes occupy the 5 centimeters just below the surface—the organic layer.

Prevailing models take either a “relative demand” approach, which assumes that a plant’s ability to compete increases as its need for nitrogen increases, or a “microbes win” approach, which assumes that microbes take as much nitrogen as they need and plants use the remainder. The N-COM model considers competitive interactions between the roots and the microbes; root depth, root biomass density, and uptake kinetics all influence how competitive a plant species is. 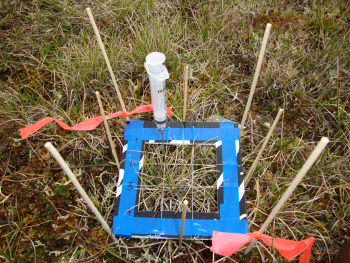 C. aquatilis is a sedge with deep, dense roots that reach the permafrost, 20–25 centimeters below the soil surface. E. angustifolium is a sedge with permafrost-reaching roots but a much lower biomass density. S. rotundifolia is a ground-hugging shrub with dense, shallow roots.

The researchers found that the plants used different techniques to compete with microbes. C. aquatilisand S. rotundifolia established good, competitive roots, so they took most of their nitrogen from the nitrogen-rich organic layer regardless of rooting depth. E. angustifolium, a poor nitrogen competitor with weak roots, avoided competition by shifting its nitrogen uptake to deeper soil layers.

Both the relative demand and microbes win models predicted that plants would take up high amounts of newly thawed nitrogen from the permafrost boundary, but none of the species did this. The N-COM model accurately predicted uptake for all three Arctic species tested.

Most nutrient uptake models are based on plants from temperate zones, especially crops. The authors urge scientists also to sample in greater detail tropical and Arctic ecosystems. These areas may have high variation in plant traits and competitiveness. What’s more, these undersampled areas often face the greatest environmental risks. (Journal of Geophysical Research: Biogeosciences, https://doi.org/10.1002/2016JG003554, 2016)